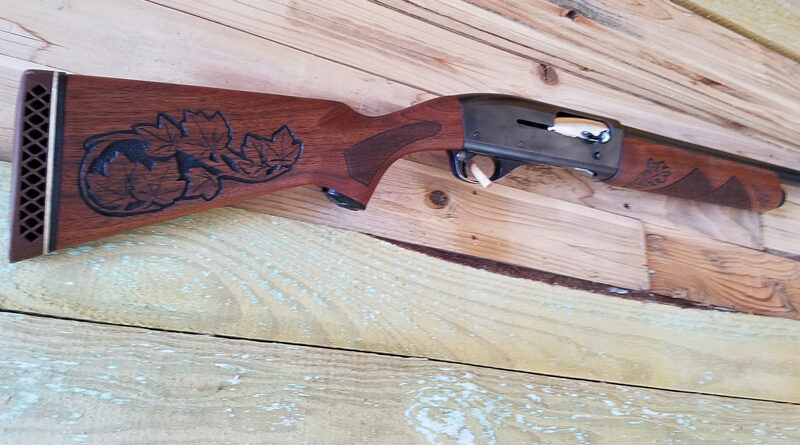 I really wanted at least one spring-action 12ga shotgun in the stable so the 11-48, Sportsman, Mohawk 48 ‘frankengun’ was a perfect candidate. I couldn’t imagine anyone would want it since the internals all have 11-48 parts the receiver says ‘Sportsman’ and the barrel has Mohawk 48 stamped on it. The thing is, it shoots fantastic now and I love busting clays with it. With that in mind I decided I’d make it a little more me – I’d practice some carving on it as well.

Because this particular rig was a very classic 1960’s looking shotgun I thought I’d put some traditional looking carving on it as well. I chose the leaves because it matched the style and overall vibe of the gun.

I will be the first to admit I’m a sort of beginner/intermediate carver and prolly shouldn’t be let near anything expensive but since I was keeping this and NO ONE will want it I could play with it the way I wanted.

I also decided to take all the nicks and blemishes out and re-check all the checking on the stock and forend to make it look nice and crisp.

So I got started and took some pics along the way. I have much to learn about carving but it’s a nice first attempt and a classic look.

I think it turned out pretty good for what we started out as which is a beat-up, mismatched gun that wouldn’t cycle and smelled/looked like it wasn’t taken very good care of in its lifetime.