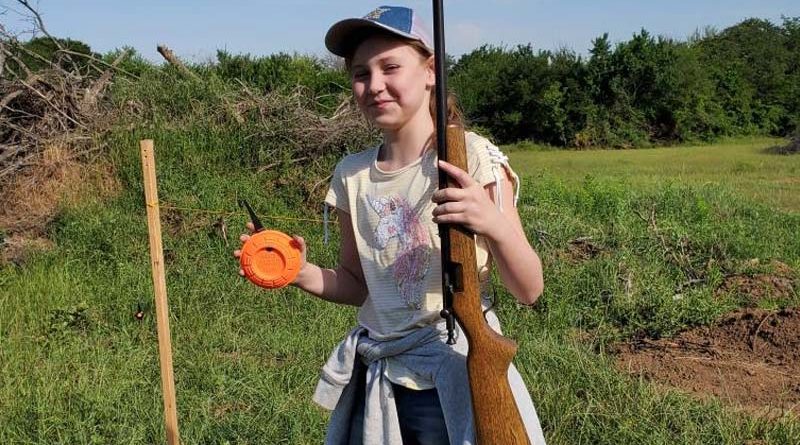 I am not now nor have I ever been a great shooter. I am not a shooting instructor anywhere for anybody nor have I ever claimed some great skill in sending projectiles downrange with overly reliable accuracy. I’m just a guy who likes to shoot and is pretty passable at busting clays on a good day. So when my kids wanted to learn to shoot I was both excited and a bit overwhelmed. Tons of questions flooded my brain and I tried to set up the best possible scenario to get my girls paired up with success like every dad throughout the generations has done with their kids.

Both my girls shot this last weekend but my youngest (7 yo) had a lot more help than the ten-year-old did solo-shooting. It turned out great and she did well but the object for my youngest was more making the .22 rifle and pistol we had available to her fire than it was about anything else. This is great and she did great. She was pleased as punch she was shooting the same guns as her big sister and was treated like the responsible beginner she is. But for this post, I will focus more on the older of my girls. I spent the most time with her and while my father and sister were helping my youngest with every shot I was at my eldest’s aid for the day.

The simple thought of me as a firearms instructor is almost laughable to me but as luck would have it (bad or good) my kid got stuck with me. Some things I was very much not worried about: that she would treat the gun like a toy, or be pointing the little .22 Springfield rifle in an unsafe direction, or issues with safety discipline, ear protection, and so on. Both my girls have been cleaning and restoring/repairing firearms with me from a very young age. They’ve had me showing them the proper way to handle firearms since their little hands could hold one and those lessons seemed to stick and stick well. So those hurdles were not an issue for them out at the ranch and they basically ran flawlessly in that regard the entire day. Nope, the test for us both is could I get us through it and teach her to shoot well enough to actually hit something at the same time making it fun enough that she’d want to do it again? I had no idea.

With the trust only a kid can give their parent when explaining something new I did my dead level best to explain how to hold the rifle and what to do and in what order while she patiently listened to me. I butchered my way through what a sight picture should look like and how to squeeze the trigger to get the shot off. It didn’t help either of us that she is cross-eye dominant and wanted to sight with her left eye even though she is right-handed – but we got through it.

What happened next is all her – she started hitting. Not once in a while but consistently. I watched as my daughter started hitting the paper targets, then bringing in her pattern. After that we started with Dr Pepper cans at 12 yards. Not a great chasm to be sure but this was her first time really shooting at targets so I didn’t want an unattainable distance to stop her. It didn’t, my girl started slamming rounds thru empty cans with regularity. Near the end of the nearly two-hour session, we decided that we’d try a moving target. We hung a clay target from wire hung from a string. It twisted and swung gently which was about perfect. On the third shot she got dead center high.

It turned out to be a great day and both girls wanting to go shooting again. They were happy and chirping away about what they liked and didn’t like and what they were going to do next time, just like we do. I was thrilled they were safety conscious the entire day and enjoyed running the guns. As an added plus as it turns out, my daughter has some natural talent shooting – must skip a generation or something.