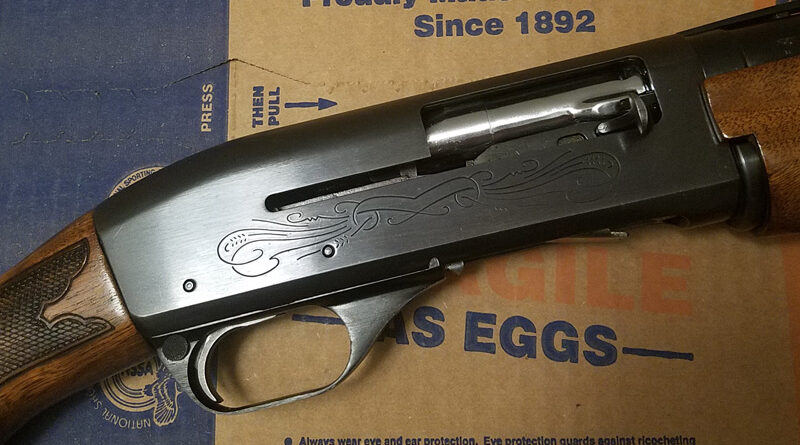 Almost a year ago to the day I traded some work for an Ithaca Model 51 Featherlight autoloading shotgun. It rapidly became one of, if not my outright favorite, shotgun to bust clays with. It’s soft on the shoulder, with a high comb, a nice ventilated barrel, double beaded sight, and a full barrel choke. Coupled with the tasteful engraving from the factory and a walnut stock – it’s a great deal of shotgun for the money. Though this gun is one of those models that comes with a big asterisk beside the name.

The Model 51 was built from the early 1970s to 1987. As it turns out, it’s one of the guns that I’m positive Ithaca themselves in their current iteration would rather not have to think about again. So why is that? Let me explain.

The poor model 51 is the problem child of two main contributing factors I can see. The first is the limited materials/engineering of 1970’s level technology and the others manifest themselves by way of some design flaws that marry up in the model 51 to make a perfect storm of frustration.

Let’s start with the former issue. I’m going to give Ithaca a lot of leeway here when I say that parts, materials, and design/testing were not up to the level that a company can bring to bear today. If you look at most gas-operated shotguns of the 70’s era many, if not most, of them have some pretty glaring faults that manufacturers were trying to work through before the age of computer-aided design and computer-controlled machining. The level of precision that is commonplace today just wasn’t possible 40 years ago.

The second issue is much more the 51’s design. In short, the gun has a few things that can contribute to it not cycling properly or at all in some cases. There are three main failure points to the gun that you will hear about:

In the interest of being fair, I have replaced more than one spring and nylon bushing in guns over the years, and this issue is not isolated to the model 51. These are wear-and-tear parts that commonly fail across the board and many companies make replacement parts for a reason.

Returning to my particular example of shotgunning excellence, under examination I found my model 51 had all three problems. However, it’s so soft to shoot and I like it so much that I wanted to see what it would take to fix it. As it turns out – a lot. 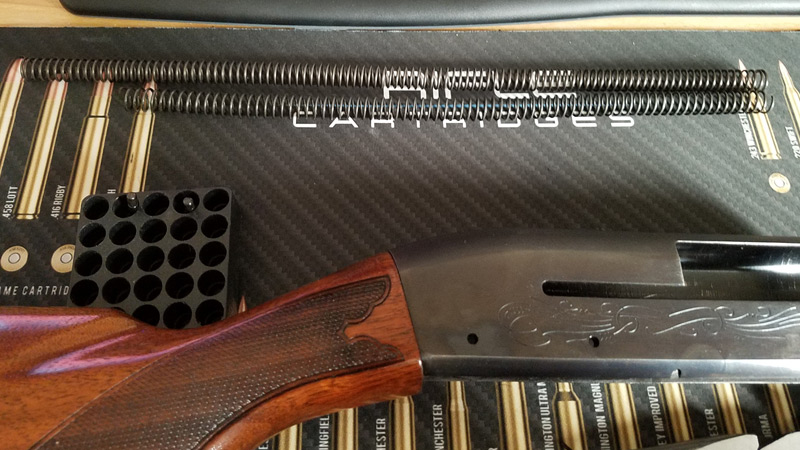 The first issue was resolved pretty quickly with a new action spring from Numrich which was about $10. Just judging from the full 2 inches that had been compressed on the old spring I couldn’t have been getting the full return from the original spring. Once I replaced it there was a great deal more snap in the bolt return stroke then there had been. 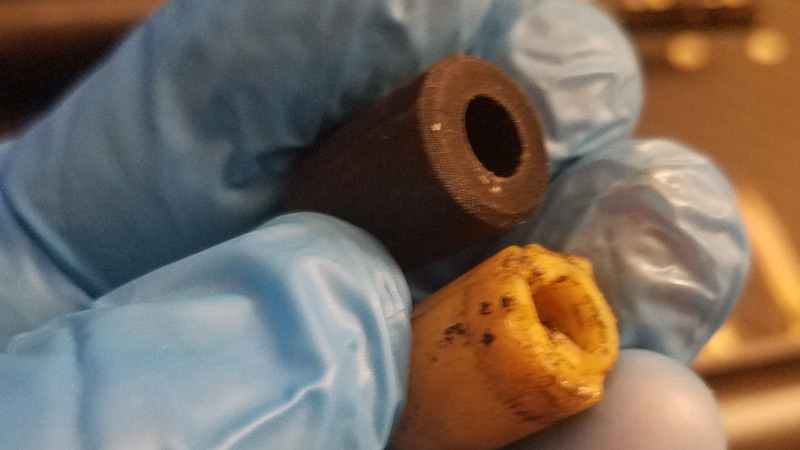 The second is a new nylon bushing for the bolt. The old one was crumbling and I was loathed not to replace it. A quick order from Jack First Gun parts and I had a new bolt buffer bushing.

The third issue would be a little tougher. As I soon learned that no one sold the slide assembly anymore and finding an in-tact slide assembly from another 51 that the guy “only took out for duck season and hardly ever fired” would still have the same issue mine had once I started rolling shells through it for clays. So that was out.

Taking it to a gunsmith turned out to be an expensive proposition as they wanted more than the gun was worth and months if not a year (because of the pandemic backlog) to repair it which was really just a solder job and they wouldn’t guarantee the slide wouldn’t break the first time I cycled it under load.

A machine shop said they might be able to do a proper mig weld on it but they were closed because of the pandemic. This was not looking promising. Since Ithaca no longer made the gun I was mostly stuck with a broken gun. So it sat broken for the better part of a year until the world turned a few times.

About a month ago two things changed. My local Harbor Freight began stocking the flux-core welder I needed to weld it myself and I sold another gun that supplied the money to buy it and all the accessories I needed to do the job myself. So that’s just what I did.

Now let me make a disclaimer right here and say that I am not telling you that this is what you should go out and do. I am not the world’s most gifted welder. I am not a certified gunsmith. I am clearly stupid. I sold a perfectly working Browning Auto A-5 so that I could buy a welder to cobble together a shotgun that is older than I am in a bid to try and mend a widely known catastrophic design flaw most people just take the loss on. At this point, I am very much on par with a guy I knew in the ’90s that loved his Pontiac Fiero so much he kept wrenching on it and throwing money at it until it became almost as reliable as other cars were naturally. So just to be clear: THIS IS NOT A GOOD IDEA, I AM A MORON.

Ahem, now then, I did it anyway. 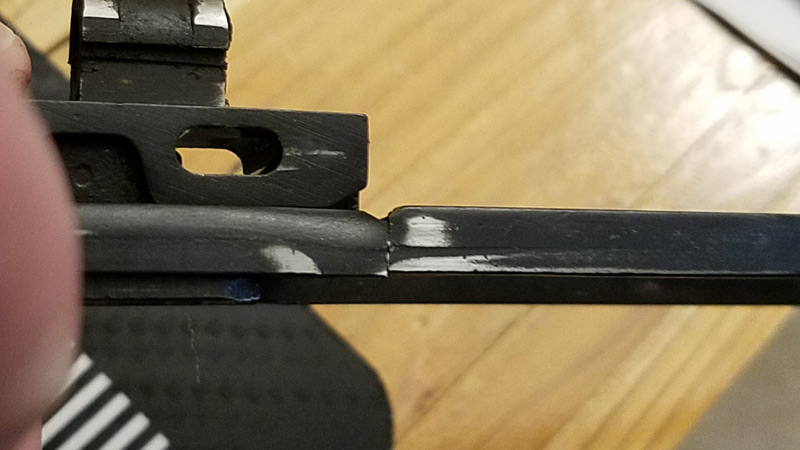 As you can see the slide broke on my gun exactly where everyone else’s breaks – right at the notch in the slide. 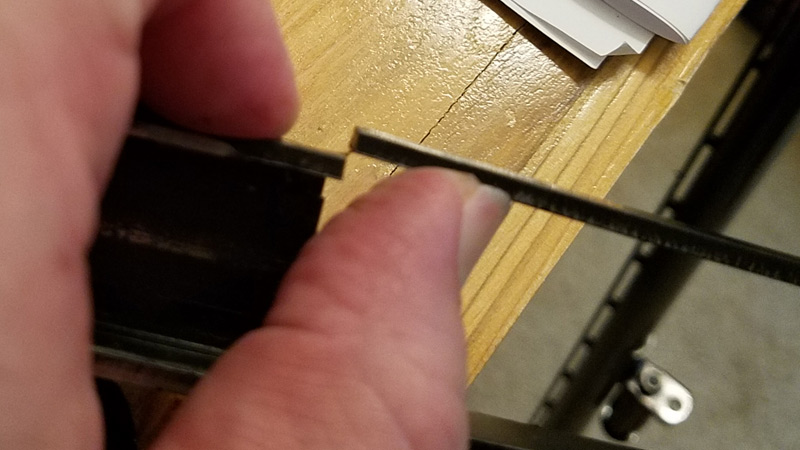 It’s a clean snap all the way through at the weakest point. 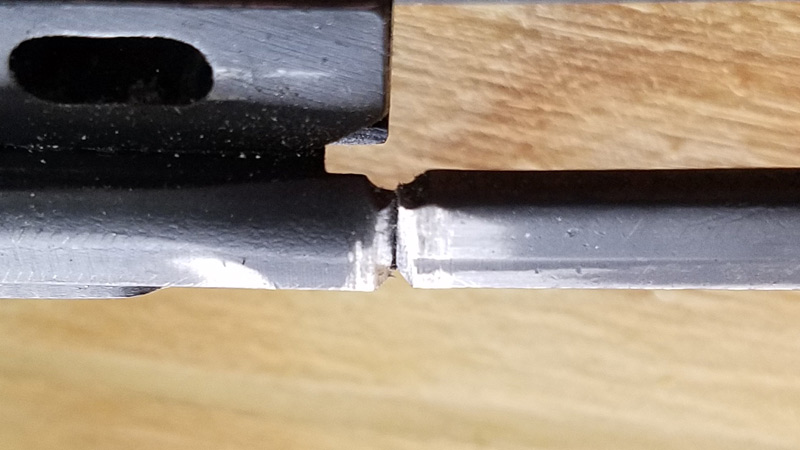 So I filed a “V” along the crack so I could do two things. 1. Make sure I could dial down the voltage on the weld enough I didn’t just blow through the material and 2. Get good enough penetration with the weld that it’s hopefully going to be stronger here when I’m done. 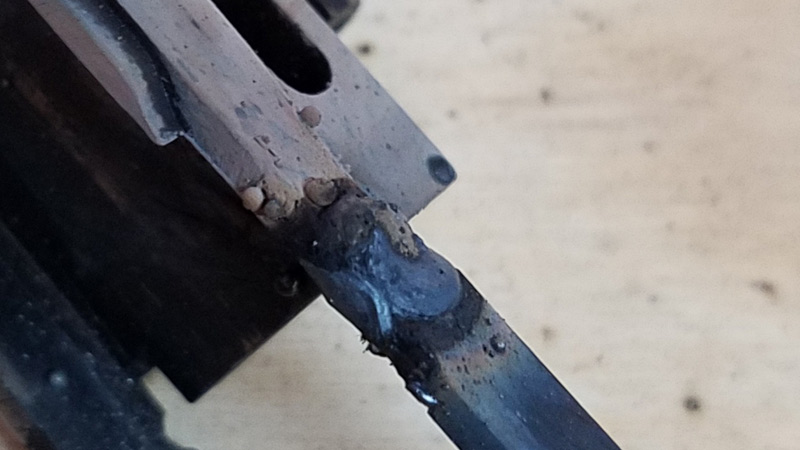 Then I did the deed. I figured the worst thing I could do was screw up and still have a non-cycling old shotgun. It ain’t pretty and I was cleaning flux and slag for 20 mins afterward but I did make two pieces back into one. 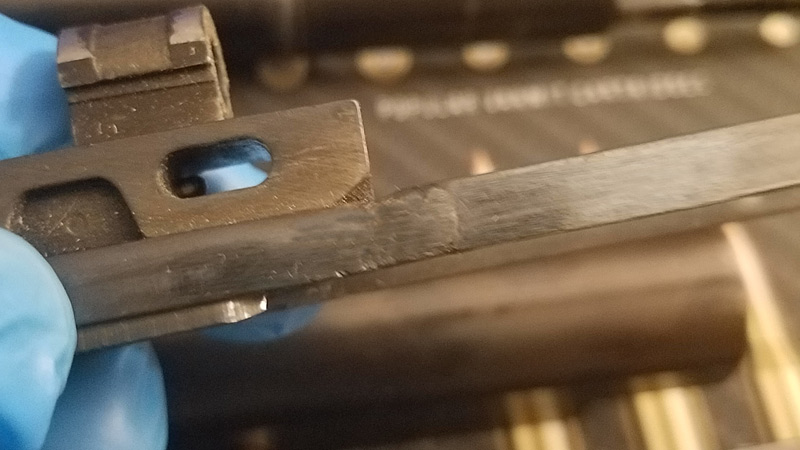 After a bit of filing. Okay a lot of filing, to get the profile right I found it looked pretty okay and fit quite well inside the receiver. The action felt smooth when I worked it by hand and didn’t show any signs of cracking.

So, now all three issues I found were fixed and it was time to go shoot the gun! I put 125 rounds through my beloved Ithaca and was so happy to have it back. There were small cheers to see it out at the ranch doing its thing, and for a time – it was good.

However, it would seem the old girl hadn’t finished fighting me yet. When I did the takedown after shooting to clean it I found that at some point during the shoot one of the front hooks on the slide had broken off and fell clean out of the gun. I’m not going to recount the hate-fueled rant I spewed at the 51 (and the universe in general) when I found out it had thwarted me again. Mostly because I was cussing so much I was unable to finish a thought other than using one of the other ‘perfectly functioning’ shotguns I own to end the 51’s existence on this mortal plane.

After I calmed down, which admittedly took longer than it should have, it occurred to me that my weld held fine. It didn’t fail in THAT place again it failed in the other spot of weakness along the same rail which I’m guessing since the rear point held the shock just transferred to the next weakest place, the front notch (yes there is more than one weak spot on the rail, three in fact). Still, it was a bit of a kick in the teeth. 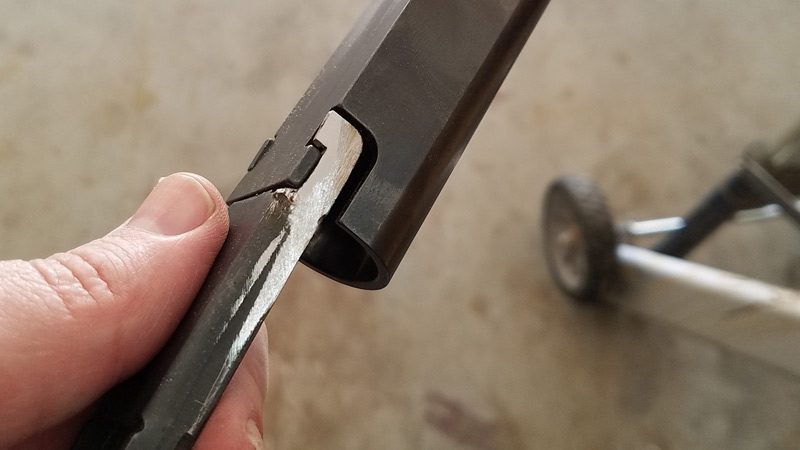 So the welding gear came out again. Since it wasn’t just a weld this time the piece had literally fallen out of the gun at some point I needed to fashion a new front hook from some flat bar to make the assembly functional again. It took a little bit and a lot of careful measuring and fitting had to go down even after this photo was taken but it was back to being a functional gun with all the various parts working. From there I decided that the only thing for it was to take the gun out again and see what we would see.

I am happy to report after a few boxes of shells for the second time, the gun is still functioning and all parts are unbroken… at this time. I’d love to have run more through it but in these times of spartan shell availability, this is about the best I can manage at the moment. 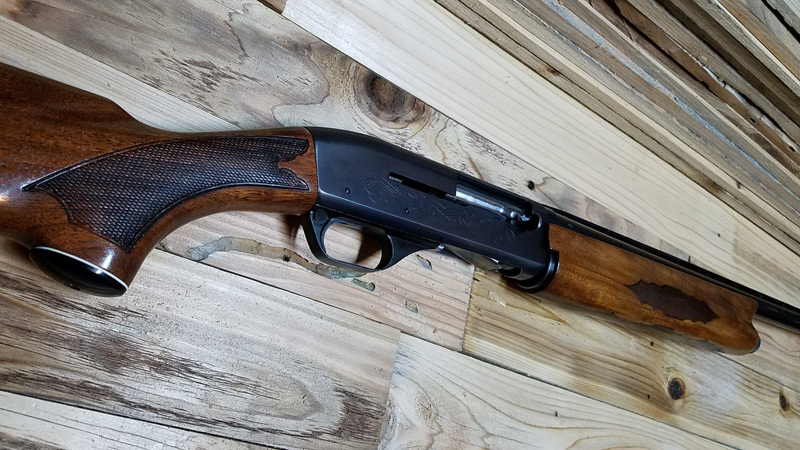 So in conclusion, is this a good gun? Well, that would depend greatly on what your definition of good is. I can wholeheartedly say it’s great to shoot and pretty to look at. But after that, I have to follow that statement up with – “When it’s up and running.” I completely understand why Ithaca didn’t want to open this can of worms when starting back up in 2005. They had the Model 37 and several other guns that they knew would sell and sell well that didn’t have the issues that the 51 does.

That just leaves those of us who like the Model 51 with a choice: roll up your sleeves and get to work OR abandon it and spend your money elsewhere on a more modern, more reliable gun. I’d give you my opinion but I have pictorial evidence suggesting which way I lean.

Author’s Note: I know. I know there are gunsmiths, advanced people of all shapes and backgrounds that are going to tell me what I did wrong here. If I had only done this or that it would be better, stronger, faster. That I’m chasing the dragon and it’s going to fail again because of XYZ. I know. I’m not advocating that other people do this, it’s just what I did and I think I covered the “I’m a moron” angle in the post above.