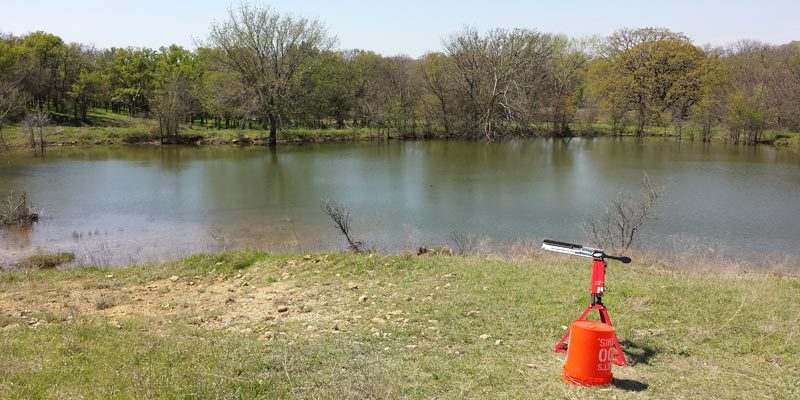 There are snakes in Texas. It’s a verifiable fact that if you’re out mucking around in the country in Texas there are going to be snakes that can mess you up. Where I live there are three main types; Rattlesnakes, Cotton Mouths (Water Moccasins), and Copperheads. Any of the three is not a pleasant time if they get close enough to you. So when they start coming at us when we’re out shooting at our favorite shooting spot we shoot them.

I don’t feel the need to shoot a lot of animals. (I have a whole post on that here.) That’s not a moral judgment, there are several reasons to hunt and harvest game and I believe that hunting is a great responsibility and one I don’t feel I need to do to get my ‘fix.’ That said, I do love to shoot and sporting clays are my jones of choice – hence the beatific setting above. The only issue is said beatific settings also comes part and parcel with cottonmouths when the sun warms the water in spring. Since I don’t feel the need to get bitten, they are going to have to go if they decide to share our area.

Let me set the scene a little here. We were taking a break from popping clays on the very day the above image was taken. Bwana and I were taking a pull on a Dr. Pepper when Bwana said “Sean, snake!” Bwana and I have been doing this for a while and having known my father all my life I recognized the tone in his voice – this wasn’t a benign snake and he didn’t have a gun on him as he looked out over the pond at the cottonmouth swimming right for our setup. I needed to bring a gun and take care of it as I was closer to the guns.

The shooting vest I was wearing had two large front pockets in it. One full of 20ga. shells and the other full of 12ga. Both were 2 3/4″ number 8 birdshot. In the back of the truck were 4 guns laid in unzipped soft gun bags. A Stevens 555 over & under, an older Remington 870 Wingmaster 12ga. (with the round forearm), a Winchester 20ga. pump and a Remington 870 Express 20ga. All of them except for the Wingmaster had a skeet choke, with the Wingmaster having just a cylinder bore. I could easily pick any one of them as simply as any of the others.

There was no thinking – it was all automatic instinct. I grabbed the 870 Express, loaded a shell, slid the action forward and made for the snake. I got him in one, about 5 feet from the bank. A total shot of roughly 20 feet. From the first warning to the actual trigger-pull took about 6 seconds.

When it was over Bwana looked at the gun in my hand laughed a little then asked, “The 20ga. Why that one?” At the time I didn’t know why I picked the Express. Both 12ga. guns would have most likely been better choices. The other 20ga. was just as good a choice as well. So why the Express?

After thinking it over for a while I have come to the conclusion that it was familiarity and nothing else. I have run close to 1000 rounds through that gun. I know everything about it; how it feels in my hands, how it shoots, even its weight is ‘right’ in my head. So when it came time to defend ourselves against a threat, I grabbed the gun I was sure of. True, it was indeed only 20 feet so anything in the truck would have worked but I ‘knew‘ I could do it with the Express.

So was the 20ga. Express the best gun to use? For me in that second, I still to this day think it was.