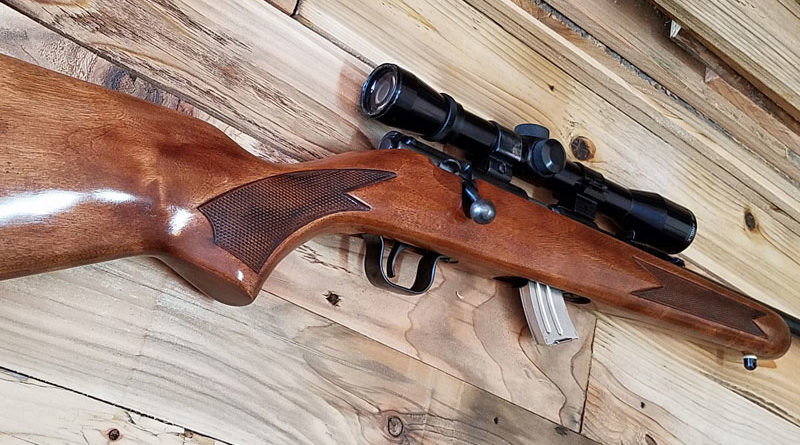 Around seven months ago I started a project gun on a recently acquired Lakefield Mark II, Cal .22 rifle I picked up at a local gun show for a C-note and some change. It was in some rough cosmetic shape and very grungy on the inside. Basically it had been used pretty hard and traded in for something more substantial. The dealer I got it from said it was a young man, most likely in his early twenties, in search of some extra cash for his first deer rifle. It was a little worse for wear but the bones of the rifle were in good shape. Plus I knew I could find parts for it if something required replacing. So I picked it up and started the restoring process.

I broke it down and took care of the burgeoning rust issues then cleaned the sludge out of the barrel and chamber. Next came the stock, it was pretty banged up and the previous owner had not been kind. After a ton of stripping, sanding, and refinishing I put the whole thing back together and it came out looking pretty good for a 30-year-old beater. The cast took a break after that and though it was restored I just never got back to shooting it until last weekend.

After shooting it and sighting in the scope two things stand out to me about it. The first is I really love the way this rifle looks and feels. I’ve owned and shot many .22’s in my time but this may be my favorite for no other reason than its pretty and feels right when I hold it. Okay, it REALLY doesn’t hurt that with the scope on it I was holding 3 shot groups the size of nickel a quarter inch from the pin-sized center of the bullseye at 50 yards with it and about a half-dollar grouping at a football field. That’s not a great feat of sharp-shooting competence by any measure. Nothing greater than a 16yo’s with the same equipment have been doing for decades before me – but for me, that was new. I was overjoyed.

The other thing I discovered is I love plinking with a bolt action magazine feed rifle. Something about shooting it and working the bolt for each round felt awesome. Seeing the pattern and realizing I had correctly sighted in and held a pattern that was about to be turned on un-suspecting Dr. Pepper cans that thought they were safe made my day completely.

I had a great time and whole-heartedly can recommend the Lakefield Mark II and its Sister the Savage Mark II.

Link to Part 1 of the Lakefield Mark II