This Smith & Wesson 22a was not in need of rescue. Actually, I didn’t even want it at first if I’m completely honest. It came to me as part of a lot of three guns I was buying from a co-worker in an all-or-nothing deal. I wanted the other two in the deal so the 22a came with it. 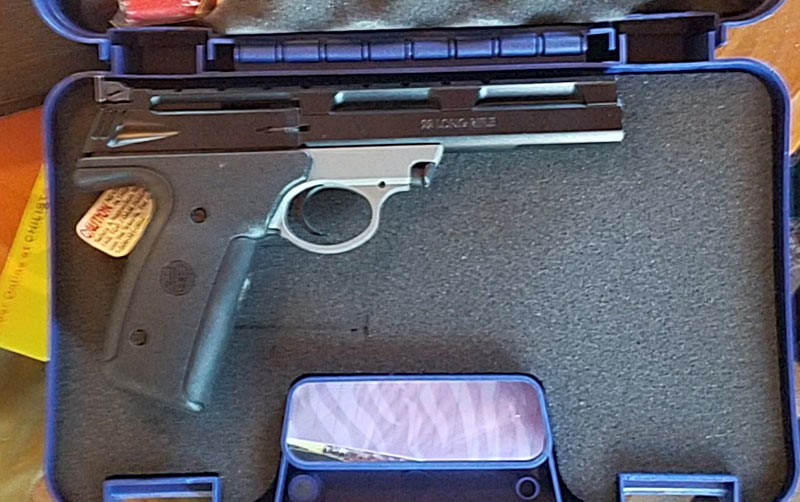 There was absolutely nothing wrong with it. It came in its original case with the case lock, receipt of original purchase and both mags. It was basically flawless and untouched. Other than being pretty dirty I couldn’t find a thing wrong with it. Not a thing – other than I hated the way it looked.

After a little searching online I came to the conclusion it was either sell it or mod it to look better. The 22a isn’t worth much but I could have squeezed about $60 – $80 above what I paid for it out of such a deal. However, I chose the stupid path, the path I knew I’d take as soon as I laid eyes on it – throwing money and time at it until I was happy with it.

About a week spent cruising eBay I found what I knew would help, a nice set of used wrap-around grips. $35 and a little rattle can action and the ugly duckling was not quite a swan but MUCH improved in the ol’ looks department. The beefy grips also feel more comfortable to shoot in my humblest of opinions.

Was this necessary… hell no it wasn’t! Should I have sold it… yep. I could have actually profited a little from a gun deal but no, no, I needed to jack with it and change it until it was something I wanted to keep. It’s sickness ya’ll, a terrible sickness and I can’t stop.